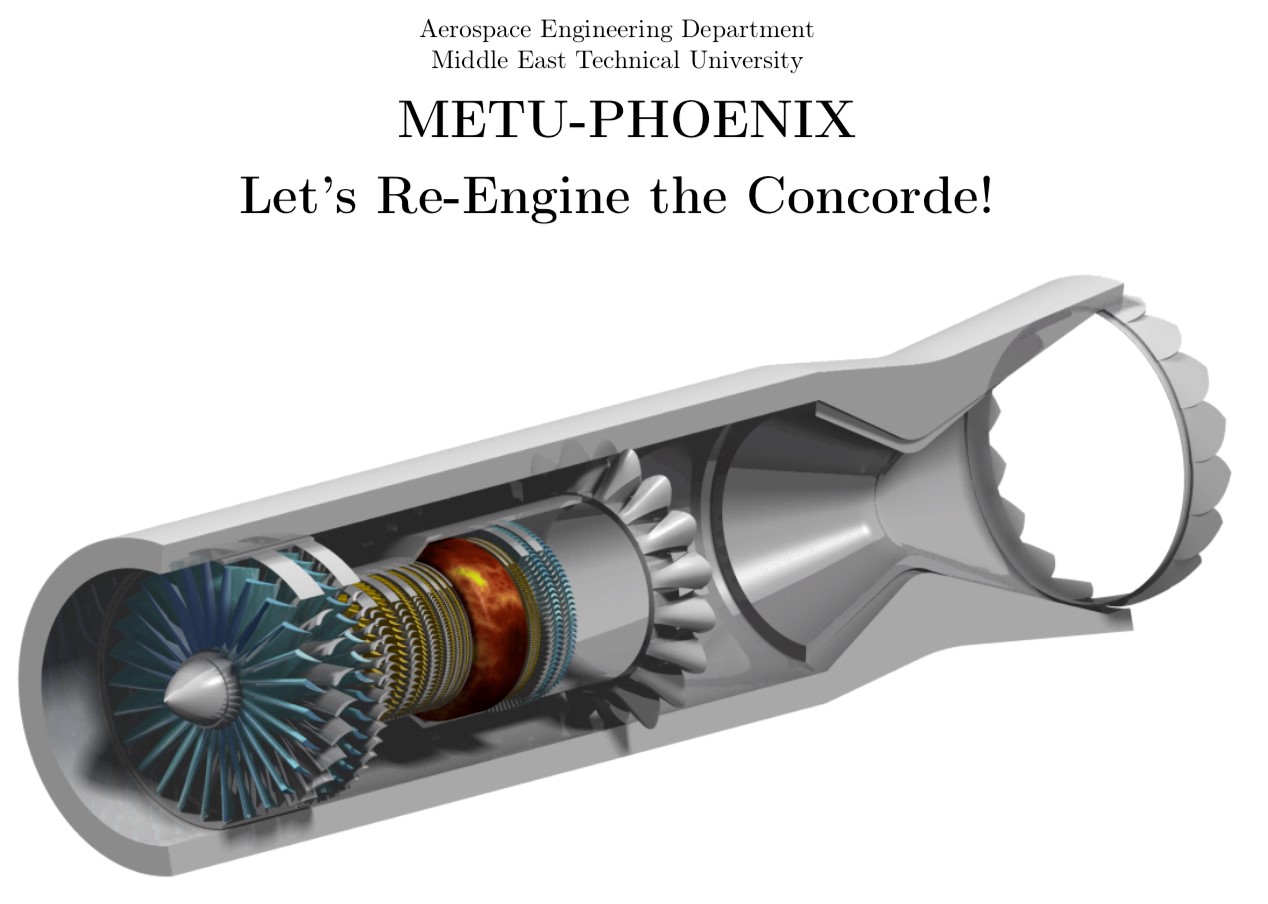 METU-Phoenix turbofan engine designed by METU NCC Aerospace Engineering Students awarded as the second best proposed design in the world for Concorde aircraft at the AIAA Undergraduate Students Gas Turbine Engine Competition. METU-Phoenix engine, which is capable of flying twice as fast as speed of sound (Mach 2), will be considered as one of the candidate engines to be installed on Concorde aircraft which is expected to come back to skies by 2028. Concorde has been grounded for the last 18 years due to high fuel consumption rates, extreme noise levels and economic concerns; however, thanks to the new design proposed by the METU-Phoenix Team, all of mentioned issues are enhanced drastically.

American Institute of Aeronautics and Astronautics (AIAA) is organizing a competition under the title “Undergraduate Students Gas Turbine Engine Competition” annually for the last 40 years inviting all of undergraduate students in the world to design a new jet engine by satisfying the requirements imposed by AIAA.

The METU-Phoenix engine preliminary design report was chosen as the finalist at the first round, and team members presented their work at the second round on the international conference with the title of “2021 AIAA Propulsion and Energy Forum” between 9-11 of August 2021 and based on the evaluations that have been done by the academic and industrial experts, the METU-Phoenix engine was awarded as the second best proposed engine in the world.

Concorde aircraft is a British-French supersonic passenger airliner, capable of flying twice as fast as speed of sound. It was operated from 1976 until 2003 and was originally powered by Olympus 593 engine designed and manufactured by Rolls-Royce/Snecma. However, due to very high fuel consumption rates, noise levels and high maintenance costs, this legendary aircraft was grounded.

In the scope of this competition, the METU-Phoenix Team was able to successfully satisfy all of the technical requirements imposed by AIAA; additionally, a dramatic reduction in the fuel consumption is achieved. Also, the weight of the engine has been decreased thanks to the utilization of  state-of-art materials, maintenance costs have reduced as a result of utilizing the latest technology and finally the amount of noise produced by the engine is improved especially at the take-off condition where aircraft is very close to ground.

Giving consideration to all improvements that have been done by the METU-Phoenix Team, Concorde will be able to fly the distance between London-New York in only 3 hours and 30 minutes in a much faster, quieter  and more economic manner.

The METU-Phoenix engine has managed to burn 26% less fuel per engine, the engine weight has been reduced by 47% , a considerable amount of noise reduction and approximately 50,800 $ fuel cost saving per flight (53% less) has been achieved in comparison with the baseline engine Olympus 593.

Our METU NCC students are not only engineers, they are working with their hearts like artists.